The City of Cambridge Symphony Orchestra started life in 1973 as the Harston String Orchestra. Later, as a result of a change in venue, it became the Barton String Orchestra. In 2000 Leon Lovett took over as conductor and shortly afterwards, the orchestra changed its name to the Cambridge String Players. Under his baton, the orchestra has appeared regularly in West Road Concert Hall and in other venues around Cambridge. In addition to playing works for strings, the orchestra increasingly invited wind players to join it to perform works from the symphonic repertoire. Recognising this change of emphasis, the musicians decided that the orchestra needed a new name and in September 2008, it became the City of Cambridge Symphony Orchestra. In February 2012 Robert Hodge became CCSO’s new conductor.

Robert Hodge is a conductor known for his considerable skill, clarity of technique and good rapport with musicians. He devises exciting programmes that are enjoyable and challenging for players and audiences.

In the last few seasons Robert has developed a special relationship with Malta Philharmonic Orchestra, conducting them at venues across the island, and he is delighted to return in the 19/20 season to work with the orchestra again. He also recently made his debut working for the BBC National Orchestra of Wales, conducting a side-by-side workshop in Swansea.

The 19/20 season sees the remarkable 75th Anniversary of Stoneleigh Youth Orchestra (SYO) and Robert is delighted to celebrate with them, with concerts at Cadogan Hall, Queen Elizabeth Hall, and an ambitious celebratory programme of music and star soloists. Recently SYO have enjoyed success performing in the NFMY Proms at the Royal Albert Hall, and a broadcast on BBC Radio 3 as part of the Making Music ‘Adopt a Composer’ scheme. SYO tour extensively, and under his guidance have developed a wonderful exchange partnership with Malta Youth Orchestra.

Alongside SYO, Robert is Regional Director of Music for the National Children’s Orchestras of Great Britain, and Conductor in Residence at St Albans High School. He also works at the Royal College of Music Junior Department (RCMJD) where he conducts the Sinfonia, and he enjoys working with organisations including Malta Youth Orchestra, Yorchestra, Oasby Music Group, and Benslow Music.

He is increasingly busy as a teacher of conducting technique. Robert is responsible for all of the conducting classes at the RCMJD, and he teaches on the Masters Programme at the Royal College of Music (RCM), delivering a unit entitled ‘The Conductor as Educator’. He has also given workshops and training in ensemble conducting technique for a number of schools and music services.

Born in Pembrokeshire, Robert studied at Royal Holloway, University of London before winning a scholarship, funded by the H R Taylor Trust, to the Royal College of Music where his conducting teachers were Peter Stark and Robin O’Neill. At the RCM he prepared the orchestras and acted as assistant to conductors including Lorin Maazel, Bernard Haitink and Vladimir Ashkenazy. In 2011 Robert was a member of the European Union Youth Orchestra, playing orchestral piano and celeste for their European tour.

For three years Robert was Musical Director of Nonesuch Orchestra, conducting an extensive series of outreach concerts and appearing at London festivals including the St Jude’s Proms in Hampstead. He has toured the UK with aerial theatre company Ockham’s Razor, directing choirs for their critically acclaimed production, Not Until We Are Lost. In past seasons, he has conducted Oxford University Orchestra, King’s College London Symphony Orchestra, Suffolk Sinfonia, Havant Symphony Orchestra, Kingston Philharmonia, Farnborough Symphony Orchestra, the Yorchestra Holiday Courses, the National Youth Orchestra of Great Britain and Tallis Chamber Orchestra. 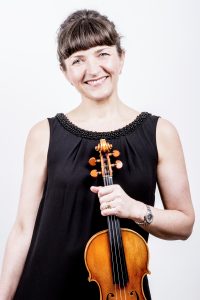 CCSO’s new leader Philippa Barton leads a busy and varied life as a freelance violinist, leading a number of ensembles, such as the Kings Chamber Orchestra, and Essex and Colchester Symphony Orchestras. She plays all around the country and further afield with various other orchestras, such as English Touring Opera, the BBC Symphony Orchestra, the London Mozart Players and the City of London Sinfonia.

As a soloist, Philippa has a growing repertoire, including concerti by Beethoven, Tchaikovsky, Brahms, Bruch, Mozart, Bach and Vivaldi. She also collaborates in recitals with the pianist, Alisdair Hogarth, having performed programmes including sonatas by Franck, Elgar and Debussy.

Philippa is passionate about working with musicians of all ages, leading educational workshops, chamber music groups, coaching for various youth and non-professional orchestras, and teaching individuals, privately and at Felsted School. She loves to guide students in discovering their own musical voice, and finding out how to express it.

Her own education was at the Royal College of Music, studying with Dona Lee Croft and Trevor Williams. Shortly after leaving college, she spent several years playing with Bournemouth Symphony Orchestra, before returning to London to continue with her freelance career.

We are delighted to welcome Philippa to CCSO.

Lesley Fotherby trained in art at colleges in Bath and London and at Leicester University after which she taught in secondary schools, worked in a Young Adults Centre and tutored adult education classes before becoming a full-time painter. She has been gallery artist with Chris Beetles Gallery since the 1980s and exhibits there regularly. Chris Beetles exhibits work by contemporary artists, together with that of 19th century watercolourists and illustrators. Further details can be found on the following website: www.chrisbeetles.com

Lesley feels fortunate to have been able to work for many years with performers who have allowed her to sit in on their classes and rehearsals including the National Youth Ballet, Birmingham Royal Ballet and the City of Cambridge Symphony Orchestra. She is particularly interested in movement and how to portray something transitory, be it the position of a musician in performance or the way light changes a landscape. Some of Lesley’s paintings are displayed in the foyer during the intervals of CCSO concerts.