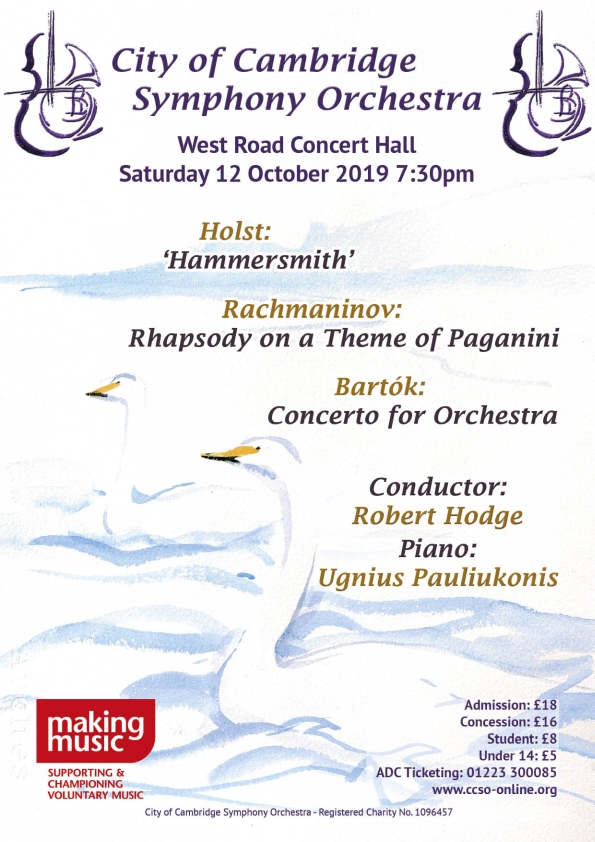 Gustav Holst loved Hammersmith, with its busy market in the Broadway, its narrow
streets and cheerful spirit. When he was commissioned to write a piece for the American Bandmasters’ Association convention in 1932, he knocked up a fascinating Prelude and Scherzo for the occasion, and he called it ‘Hammersmith’. Originally composed for military band, he orchestrated it for the concert hall, so don’t miss this opportunity to enjoy something of a rarity by this great British composer. After that, we can enjoy the immensely popular ‘Rhapsody on a Theme of Paganini’ by Sergei Rachmaninov, a sort of one-movement concerto for piano and orchestra.

The Lithuanian virtuoso, Ugnius Pauliukonis is the soloist in this evergreen classic built on a hypnotic melody by the legendary violinist. The big tune at its centre should bring tears to your eyes. Béla Bartók’s ‘Concerto for Orchestra’ is a knockout, offering virtuoso roles for every instrument and great joy for listeners. Composed at lightning speed shortly before his death in 1945, he hoped it would establish a reputation for excellence in his newly-adopted homeland: America. It did exactly that and has remained one of his most popular and approachable works ever since.

Advanced ticket sales: There is no booking fee but a 70p charge applies for postage. Tickets will also be available on the door (subject to availability).

From Junction 12 of the M11 Drive for approx 1.5 miles into Cambridge (Barton Road) Turn left into Grange Road Turn 3rd right opposite Rugby Club (West Road) We are half way along the right hand side of West Road.

Trains run regularly to Cambridge from both London King’s Cross and London Liverpool Street. If you are coming from the North, it is advisable to change at Peterborough. West Road is a 10 to 15 minute taxi ride from the railway station.